Richard introduced Chris Epping. Chris is a journalist and author. He loves baseball and has extensively researched and written about it. Chris grew up in New York and moved to Orange County in 1999 by way of Los Angeles. Disturbed by the perception that OC is the stepchild of LA, he began researching OC’s unique history for a show he hosted for PBS OC. He appeared to share his findings with us. With baseball season beginning and only thirty minutes to speak, he focused on OC’s baseball secrets. 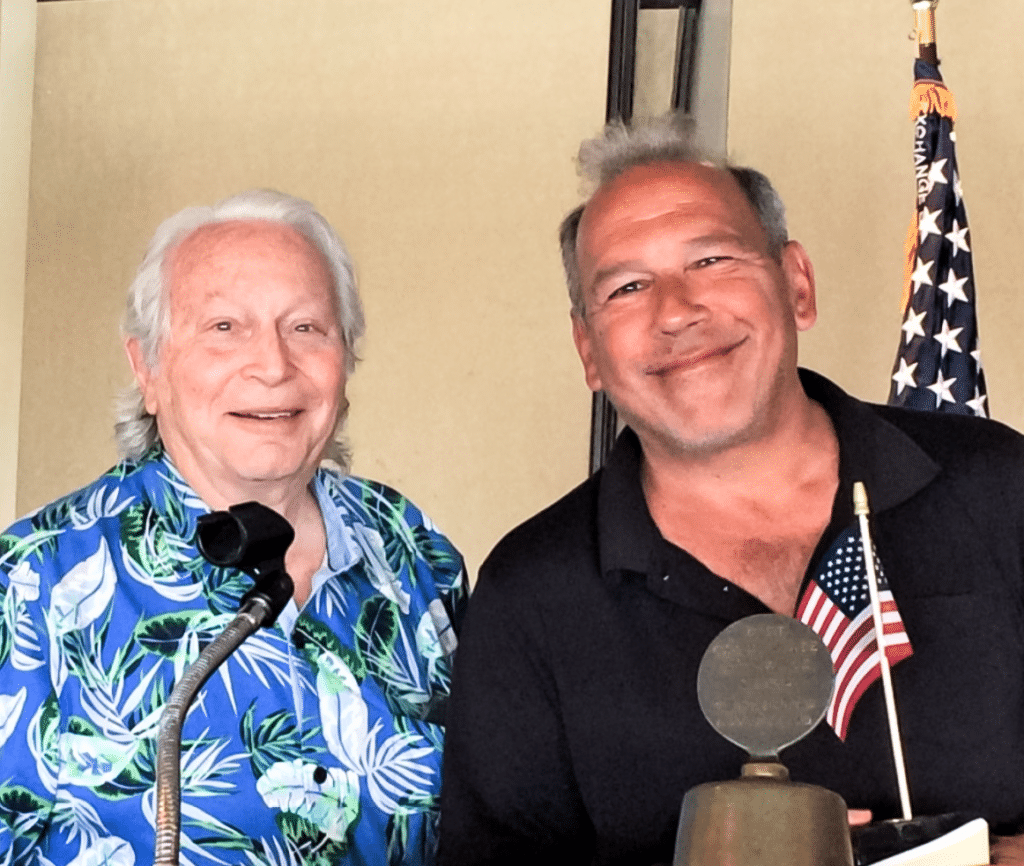 Three years before Tommy Lasorda died, his daughter approached Chris about learning Lasorda’s story. Chris began meeting with Lasorda at his home. Lasorda lived in Fullerton in the house he and his wife purchased in 1960. While most successful managers retire to exclusive neighborhoods, Lasorda loved his home and community. The house hadn’t changed much; the kitchen wall still held the yellow rotary phone. Each time the Dodgers suffered a tough loss, that phone rang at 3:00 a.m. and Lasorda argued with the caller until dawn. The caller was Frank Sinatra whose image was on the fireplace mantel next to the pope. During his visits, Chris enjoyed meeting Lasorda’s frequent visitors, such as knuckleballer Charlie Nuff. Lasorda’s friends brought him to life and elicited great stories from him. Chris and Lasorda also attended Dodgers games. Chris thought Lasorda was joking when he declared he wanted to be buried under the pitcher’s mound. But, after Lasorda passed, his daughter organized a memorial for him at the pitcher’s mound.

The Dodgers shut the stadium for the day, and Mike Scioscia, Tommy’s catcher and later league manager, organized the line-up of pall bearers. They traded off, foot by foot, transporting Lasorda’s casket to the mound. Chris discussed a favorite player, Walter Johnson. In the early 1900s, Johnson moved to Brea at age thirteen when his father took a job with an oil company. At that time, OC’s oil companies fielded baseball teams of their young, strong employees. Johnson was a devoted fan. He gained the attention of a player who showed him how to throw the ball. Johnson’s natural talent was obvious. He went on to play for Fullerton High and two decades for the Washington Senators. In 1924, the City of Brea asked Johnson to field a game as a fundraiser. Johnson happily obliged and recruited Babe Ruth to lead the opposing team.

On October 31st, the players paraded to the field to greet twenty thousand fans. (This procession inspired Brea’s annual Halloween parade.) Surprisingly, Babe pitched, which was unusual as by that time he had given up pitching for hitting. There were three homer uns including one that traveled more than six hundred feet. Chris met someone who attended the game and shared negatives of game photos with him. Chris used the negatives to recreate the field and to find home plate. One morning, during a filming of his PBS show, Chris surprised a Brea homeowner as he was picking up his newspaper. Chris told him about the historic baseball game and that his driveway was in the same spot as home plate. Chris suspects this gentleman will never see his neighborhood the same way again. Chris’ final story involved “Take Me Out to the Ballgame,” the third most performed song in American history.

In 1908, Jack Norworth was inspired to write it when he saw an advertisement for a baseball game. What most people don’t know is that the song is about a young couple. The boy wanted to take his girl to a play, but she preferred a baseball game. If he “[took her] out to the ball-game,” the boy would win her heart. Norworth retired with his wife in Laguna Beach. He never became a baseball fan. However, to honor the sport, in 1952 when he learned of the birth of little league, he underwrote Laguna Beach’s first team. In 1958, Laguna Little League hosted Jack Norworth Day where Cracker Jack Company presented him with a trophy. Each year, Laguna Little League hands down the Jack Norworth Trophy to the winner in the Majors division.

Norworth passed in 1959 and was laid to rest at the cemetery closest to Angels Stadium. Chris found his tombstone, a small piece of granite with the barely legible names of Norworth and his wife. At a book signing at Barnes and Noble, Chris expressed his disappointment with the tombstone. A baseball fan in attendance presented Chris with the donations he collected in his baseball cap for a proper monument. Chris also discussed the situation during radio and television appearances. The collections slowly grew to $7,000, and a couple who owned a mortuary donated an $8,000 piece of granite along with design services. Four hundred people attended the unveiling of a monument erected adjacent to Norworth’s original tombstone.